Roma’s Champions League adventure seems to have come to its end after a miserable 4-1 defeat to Barcelona at Camp Nou, and the Yellow and Reds now have to beat Fiorentina at the Stadio Olimpico to ensure the Champions League football for the next season as Inter, Lazio, and Milan are all looking to battle their way to the most prestigious club competition in Europe. Last weekend’s 1-1 draw with Bologna has ended Roma’s three-game winning streak, while Viola won five consecutive games in Serie A, as they’re hoping to close the gap on sixth-place Milan and secure the Europa League promotion spot. Eusebio Di Francesco’s side had troubles at home recently as they’ve lost three out of their previous five encounters in Rome including a disappointing 1-0 defeat to Sampdoria, while Fiorentina won two away games in a row against Torino and Udinese. The two teams have faced each other at the Stadio Artemio Franchi earlier this season with Roma walking away with all three points thanks to two second-half goals that made the difference in what was a thrilling match.

Rick Karsdorp, Cengiz Under, and Radja Nainggolan are sidelined with injuries in the home squad. As for the visitors, Milan Badelj and Cyril Thereau are in doubt after sustaining minor leg problems. 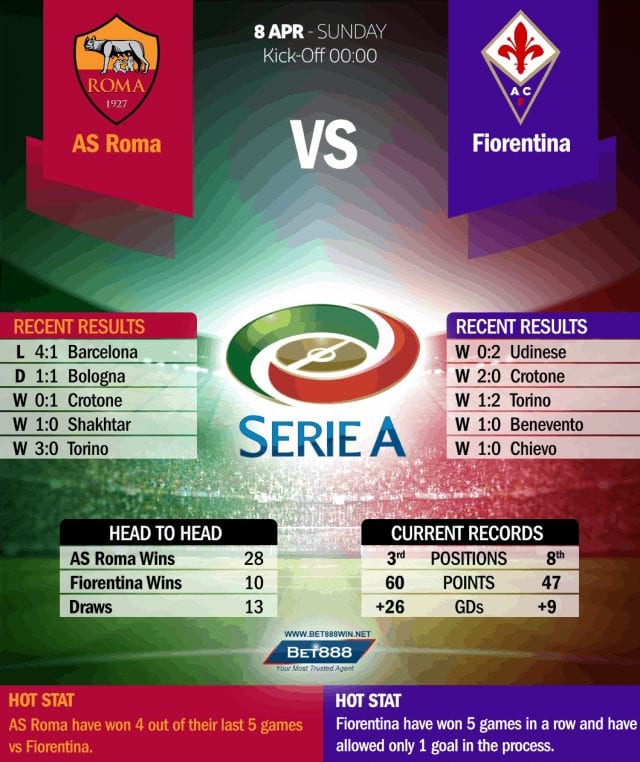