After a slow start, Bordeaux have raised their form and managed to escape the relegation zone. They are currently occupying the seventh place, and with four consecutive victories, they have great expectations ahead of a tough road clash with Marseille.
The Girondins have obtained nine points in their last three away meetings without conceding a goal, but they will hardly keep a clean sheet against the Phocians that scored 31 goals at home this season, sixteen of them in the last five games.
Marseille are undefeated in 2018, having won seven out of nine encounters in the Ligue 1 and the French Cup. They look to extend their 10-game lossless home streak against the visitors, as they are trying to secure the Champions League promotion spot.

Rudi Garcia can’t count on Gregory Sertic, who picked up a knee injury, and the same goes for the talented youngster, Christopher Rocchia, who is still waiting to make his debut in the white shirt.

Gus Poyet is happy to see his star forward, Nicolas De Preville back after a one-match suspension. Olivier Verdon, Igor Lewczuk, Diego Contento, and Alexandre Mendy were all sidelined from last Saturday’s game against Amiens, and they will probably miss Bordeaux’s trip to the Stade Velodrome. 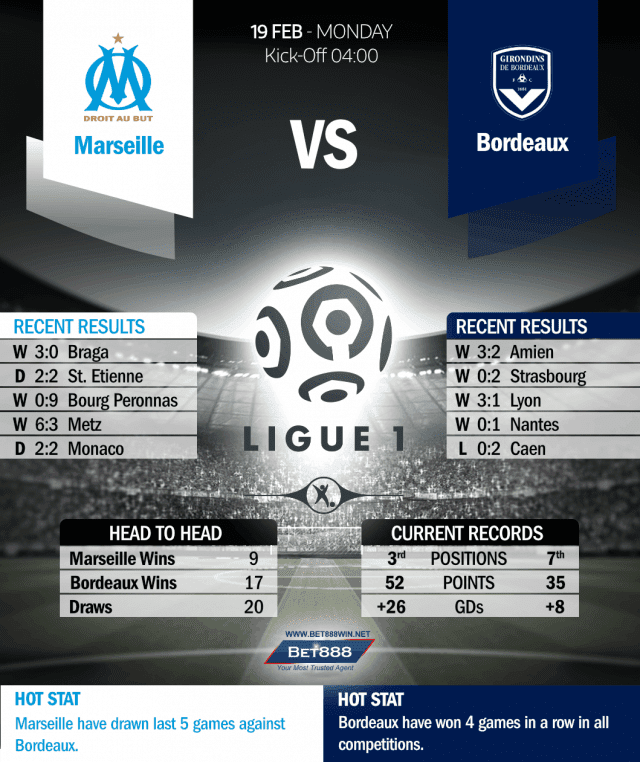