The two most titled teams in Italy with the largest fan base, Juventus and AC Milan, will face each other at the Allianz Stadium in Turin with one simple goal – achieving a victory at all costs. The Old Lady are looking to wrap up their seventh consecutive Serie A title, and potential three points against the arch-rivals would see them keeping a two-point lead over second-placed Napoli, who will be playing against the troubled Sassuolo side. A surprising and frustrating 0-0 draw with SPAL has ended Juventus’ impressive 12-game winning league streak and enabled The Light Blues to get back in the title race. Until Gennaro Gattuso’s appointment, it seemed the Rossoneri have no chance of reaching the Champions League, but the new chief of staff has managed to improve a struggling team and get them back on their feet, as they are now only five points behind fourth-placed Inter. A positive outcome against the defending-champions would further enhance their hopes of returning to Europe’s top-flight competition. Milan have five straight victories in Serie A, but their last win in Turin dates back to 2011, and they are desperate to break that dreadful streak.

Massimiliano Allegri’s squad is decimated by injuries suffered by Juan Cuadrado, Federico Bernardeschi, Alex Sandro, Sami Khedira, and Giorgio Chiellini, while the visitors won’t have Ignazio Abate and Andrea Conti, as both are yet to return to full training after picking up leg injuries. 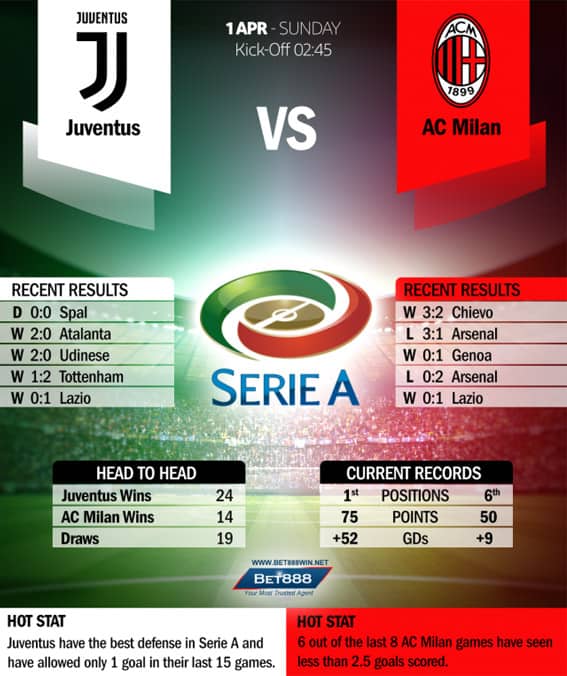