Another miserable campaign for Hamburger SV, the only club that has never been relegated since the Bundesliga’s start in 1963. After two consecutive seasons where they have managed to secure the spot in the top-flight through the playoffs, the Red Shorts are struggling to escape the relegation zone since November. They are looking to end their 9-game winless streak against Bayer Leverkusen at the Volksparkstadion. The visitors are chasing the Champions League promotion, and with eight consecutive road games without a single loss, they are hoping to secure the victory to keep up the pace with Leipzig, Borussia Dortmund, and Eintracht Frankfurt. HSV have conceded five goals in their last three home games, while the Company XI netted eight times in their previous three encounters away from the BayArena.

Nicolai Muller and Bjarne Thoelke are ruled out for the match although Bernd Hollerbach is delighted to see Kyriakos Papadopoulos’ return to action after a one-game suspension and Lewis Holtby’s recovery from illness.

Heiko Herrlich can’t count on his captain, Lars Bender, who has suffered a hamstring injury and is expected to be back on the field in two weeks, while Vladlen Yurchenko and Marlon Frey are back in the squad, but they are unlikely to start from the first minute. 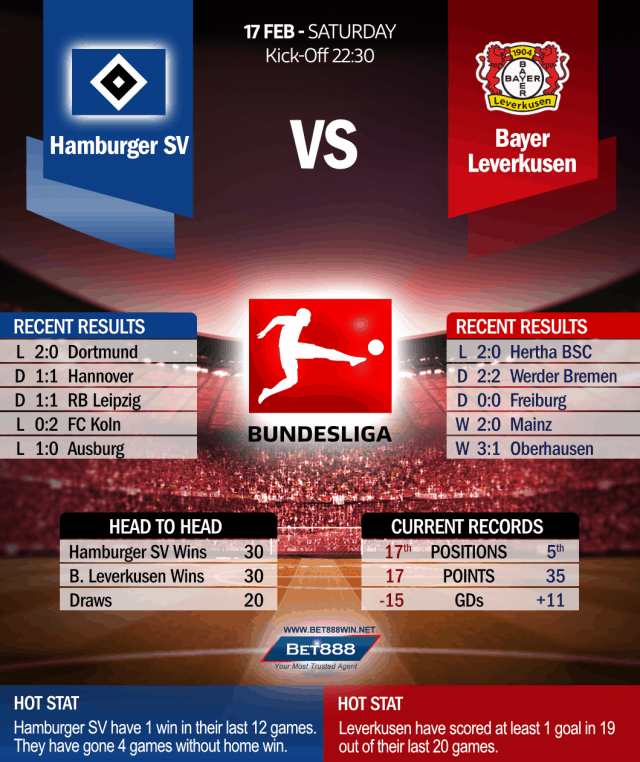