Burnley started the season on a strong foot, but their impressive displays are now well behind as they failed to win each of their last eight Premier League meetings often struggling in the final third.
Manchester City are demonstrating force since the EPL kick-off, as they have virtually secured the title ahead of the second part of the season.

The Citizens are by far the deadliest attack in the Premier League with 73 goals bagged in 25 games, but Burnley are known as a stubborn defensive unit, allowing their opponents to score only nine times at Turf Moor this campaign.

Pep Guardiola will be denied for the services of Leroy Sane and Fabian Delph, while Gabriel Jesus could return to the field in a month. Benjamin Mendy will most likely miss the rest of the season after a horrible injury he picked up back in September.

Chris Wood and Jonathan Walters are both sidelined due to injuries, leaving Sam Vokes and the unconvincing Ashley Barnes the only reliable striking power for the Clarets. Dean Marney won’t be able to play because of a knee injury, and Roby Brady’s place should be occupied by the newcomer, Georges-Kevin N’Koudou. Steven Defour, James Tarkowski, and the first-choice goalkeeper, Tom Heaton could also watch the game from the stands, which is a significant problem for the manager Sean Dyche. 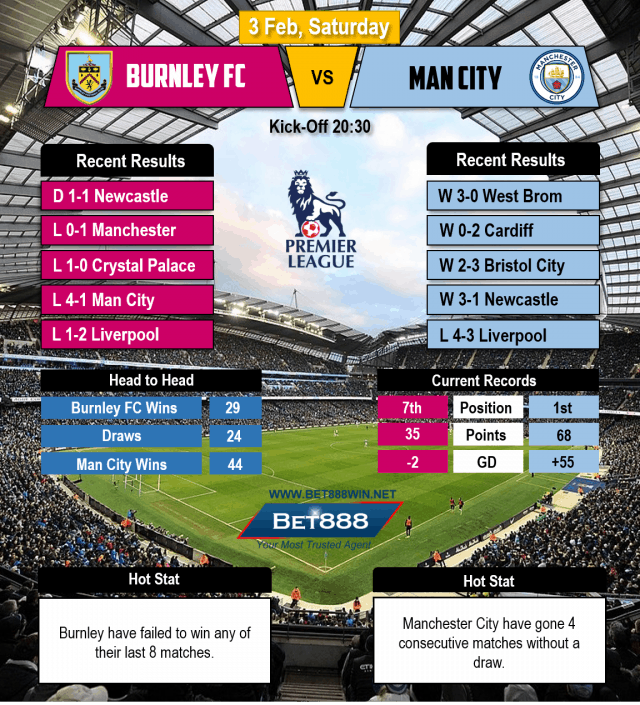